By 2022, half a billion Indians are expected to come online through their mobile phones, a population we refer to as India’s Next Half Billion. This population mass is more powerful than you think and contributes to a significant portion of the world’s population.

The incoming wave of new users is starkly different from the initial waves of internet users. They have very different income profiles, education levels, language skills, and social/cultural milieus. In the last 18-24 months, there has been considerable progress in addressing various barriers that Indian users face in their internet journey, due to efforts by entrepreneurs and various government initiatives.

Their journey to the online world starts with them gaining access to the internet, followed by developing a familiarity with smartphones and the applications in them. One of the biggest factors that fueled this change is the advent of regional languages in smartphones.

E-commerce plays an important role in helping sustain an online user, by providing them a smooth and easy shopping experience and increasing their trust in purchasing online.

How to cater to the Next Half Billion

As per a recently released report by RedSeer Consulting, there are 530 million internet users in India, of which 260 million users are ‘monetisable’. The report says:

If you look closely at the operating mechanisms of the early and current e-commerce approach, you can see that it is better suited to sell structured and branded products. They mainly appeal to relatively sophisticated shoppers, for whom convenience and selection are important.

This is also additionally fueled by a predominantly English interface. While this can cater to the modern audience, it can also leave behind many users whose first language is not English.

Only 10% out of the 76% literate population of India knows English and more than 234 million Indian language users are online now! Click To Tweet

The future of e-commerce must aim to solve this problem by eliminating this language barrier and thereby establishing more trust. E-commerce has made important strides, but its penetration still has miles to go.

Language barriers can effectively bring down trust barriers by replicating the look and feel of a traditional store, like a kirana online. This can help customers in making better and well-informed decisions and get more familiar with e-commerce for everyday usage.

Companies like Flipkart, Amazon among many others have shifted their focus towards providing services in regional languages for the convenience of their customers. Flipkart cited industry reports to say Indian language internet users are expected to account for nearly 75 percent of India’s internet user base by 2021.

As per Amazon India, Hindi use on its platform has grown six times since the launch and customers are heavily making use of payment features like ‘scan and pay’ and ‘UPI payments’ in Hindi. Click To Tweet

Summing it up, here’s how e-commerce for the future can be better designed:

We at Razorpay Thirdwatch, are committed to providing the best products and services in the market to our customers. We also take painstaking care to ensure that these products are in line with the intents of your end-users.

As we innovate and propel businesses for the future of e-commerce, we understand the importance of regional languages in the journey. In that spirit, we would like to introduce you to the latest innovation on the Thirdwatch block – PrePay CoD links. 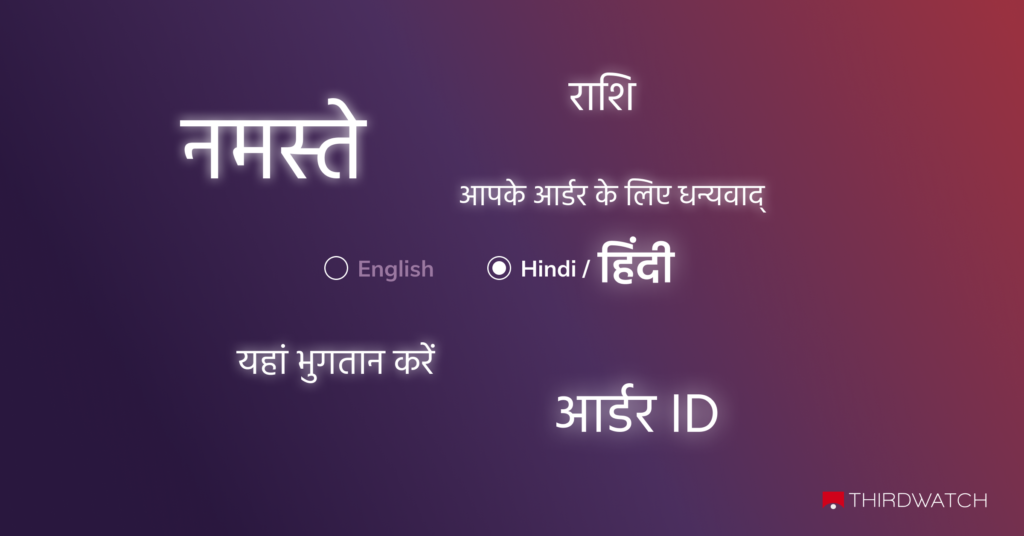 Customers can then choose to make payment beforehand for risky CoD orders, thereby reducing the chances of cancellation by over 90%!  What’s better? You can also do a variety of actions such as provide discounts, automate payment links and customize Payment links to be sent in Hindi to cater to different kinds of audiences with PrePay CoD.

With the all-new update, businesses can customize their payment links by sending them in Hindi. Studies have shown that 96 percent of vernacular language users are from non-metros and using vernacular languages can significantly boost your chances of successful delivery.

Get started with PrePay CoD

Also read: How Cash on Delivery Propels E-Commerce in India

Introducing the most effective way to recover failed payments Dakshina Store Brings Down its RTO Rate From 40% to 9% with Razorpay Magic Checkout!