“How can we improve the conversion rates of incoming leads?”

“How do we improve sales team’s efficiency?”

“Which is the best medium to target leads?”

These are some questions that sales managers are commonly asked. The best answers to such questions lies with data. This is why scoring incoming leads based on various data points can help in effective targeting.

At Razorpay, we have tried two common approaches to arrive at a lead score.

For instance, let’s suppose an inbound sales team of 5 members can call a maximum of 100 leads a day out of 500. Then the top 20% leads could be classified as high quality buckets and the remaining could be placed under medium and low-quality buckets. This method is used when an organisation is in its early stages and there is insufficient historical data to learn from.

This approach requires leveraging historical data to identify the most significant features that result in lead conversion, computing features weightage, and building a predictive model to score new leads.

This type of method is applied when there is sufficient sample size available. As a thumb rule, the minimum sample size for the binary logistic regression model could be determined using the basic formula, n = 100 + 50i, where i is the number of features used in the statistical model. For instance, if we have 5 features, then the minimum sample size required to create the model=350.

The first approach is pretty simple and straightforward, so a detailed explanation of the same is skipped. Here, the implementation of the second approach to create a leads scorecard is discussed in detail. The scorecard is very easy to interpret and could be easily understood by people with no technical background. A sample leads scorecard with two features is shown below.

There are a lot of customers who sign up on the Razorpay website expressing their interest to become partners. However, the volumes of signups and limited team size makes it difficult for the sales team to get in touch with all the leads. This is where the lead scorecard comes to the rescue. There are two main parts in building the scorecard:

We gathered historical data of 10,000+ partners to study the influence of various factors on their conversion. Shown below are the first set of all the features, called independent variables, and the outcome variables. 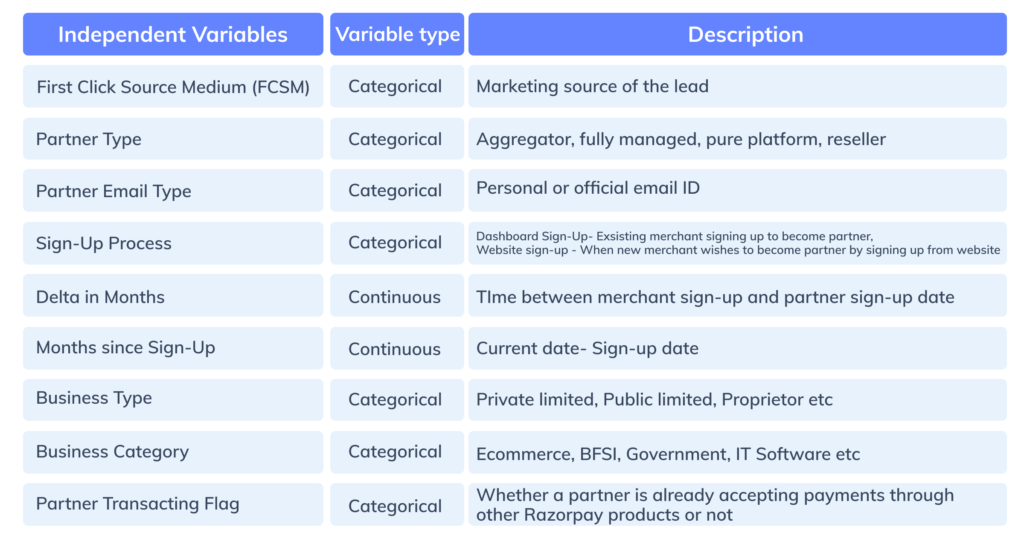 The dataset is divided into training and test – training for learning from the historical data, and testing for evaluating model accuracy metrics.

This step involves transforming all the features using the weights of evidence(WOE) method. All the categorical variables can be directly transformed, whereas continuous features (like Delta in months, Months since signup) are bucketed before WOE imputation. The buckets could be created based on the percentile approach or business intuition.

WOE provides the weights for each of the categories of features, based on the distribution of good partners and bad partners.

Information value(IV) is a useful method for measuring the predictive strength of features and for selecting significant features for the model.

The WOE and IV calculations for each category of one of the continuous features (Month since signup) is shown below.

If the distribution of good merchants is greater than the bad merchants, WOE is positive, else negative or zero. The higher the WOE, the more weightage of a particular category, and the higher would be the final category score of a feature.

All the raw data inputs are finally substituted with their corresponding WOE values.

Before running a statistical model, it is vital to select only important features. The Information Value(IV) corresponding to each of the features is computed and only features with IV between 0.02 to 0.5 are considered. That’s because features with IV less than 0.02 are insignificant for the model and greater than 0.5 can result in model overfitting. Figure 7: IV Values for all the important features

Now we fit our logistic regression model with WOE values as input features and a target categorical variable.

For scaling the model into a scorecard, we consider WOE values derived in step 3 and coefficients derived by training the logistic regression model.

The score for each category feature can be computed with the formula:

The first four parameters have already been calculated in the previous part. The following formulas are used for calculating factor and offset.

Here, pdo means points to double the odds and the bad rate has been already calculated in the features analysis reports above.

The score derived for one of the features is shown below.

The scores are derived similarly for all the features to create a lead scorecard with 7 features.

Note: The choice of the scaling parameters does not affect the predictive power of the scorecard.

The model is tested on unseen partner leads and the accuracy of the model on the test dataset comes around ~73%. False positives (78 merchants) are a bigger concern than False Negatives as that would lead to opportunity loss for the sales team.

Predicted_Good is defined on threshold score=580 i.e if the predicted lead score >580, then the partner test lead is classified as 1 or else as 0. The optimal threshold cutoff is decided based on the evaluation of precision and recall metrics across some fixed threshold scenarios, and the sales team capacity.

At threshold 580, precision=54%, recall=72%, and % merchants to be targeted via human-based targeting out of the total merchants is ~43%. Considering 580 satisfies all three criteria, it is considered to be the optimal threshold cutoff for classifying good and bad partners.

For deriving the lead score for a merchant, all the individual feature scores based on each of the categories are added up. 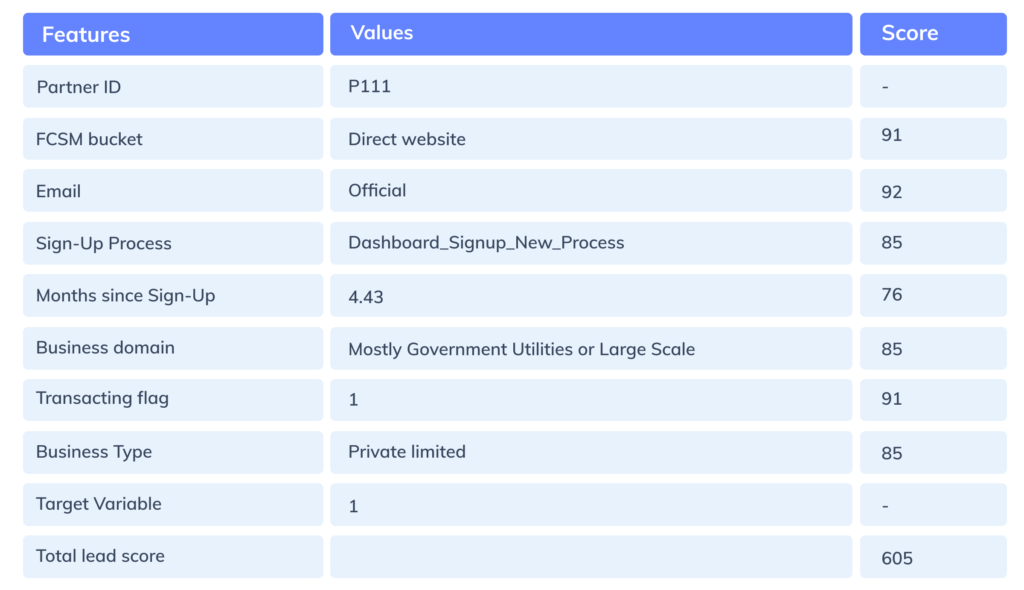 The lead scoring rules are finally integrated with CRM tools like Salesforce. All the leads piped to a specific queue are scored. The leads above the threshold score, also called high-quality leads(HQLs), are targeted daily using calls and the rest are targeted with personalised and generic emails.

To understand the effectiveness of the model, data is analysed pre and post implementation of the model.

And that is how machine learning based lead scoring has helped us scale.

The Razorpay Analytics team comprises data enthusiasts who solve business problems for different functions within the organization. They are always looking for innovative ways to derive data-driven approaches. After work, you'll find them rushing to a badminton court or a turf ground. Also, they are just as competitive at board games.